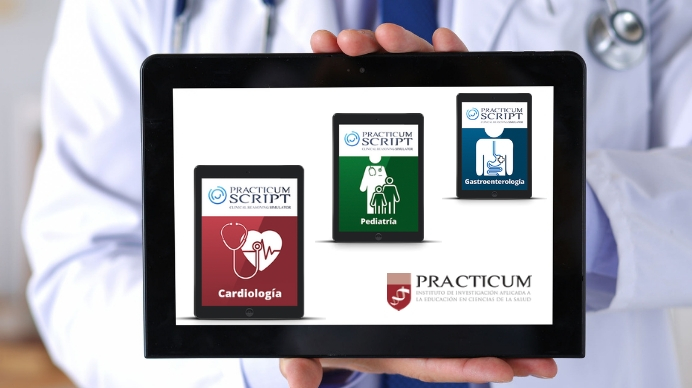 Spain, Argentina and Ecuador benefit from the new releases.

Practicum Script has launched a new campaign with four new training courses in Spain, Argentina, and Ecuador. The academic offer is supported by the Clinical Cardiology Section of the Spanish Society of Cardiology (SEC) and is sponsored by Mylan, the Argentine Federation of Cardiology (FAC), and a leading laboratory in generic compounds with a strong presence in Ecuador. The specialties offered include Cardiology, Pediatrics, and Internal Medicine. In total, Practicum Script will grant more than 3,500 scholarships.

Madrid, November 12, 2018. In an effort to continue growing and broadening horizons in Latin America, Practicum Script has increased its portfolio in the area of continuous professional development with four new courses offered in Spain, Argentina, and Ecuador. Along with SEC, Practicum Foundation offered 2,000 clinical training scholarships for Spanish cardiologists and 470 for professionals in the same specialty in Argentina’s FAC. In Ecuador, the offer included 650 scholarships in the area of Pediatrics and 450 in Internal Medicine. More programs will soon be launched in Mexico and Brazil as well.

In Spain, the program was launched on September 5 with an exclusive focus on national cardiologists awarded by the pharmaceutical company Mylan. The program was structured in three modules and aimed at increasing reflective skills for decision making in complex scenarios in Cardiology, and to strengthen the professionals’ clinical criteria to prevent medical errors associated with inadequate reasoning processes. The course consisted of 30 real cases of patients with cardiovascular diseases that are frequent reasons for consultation; it had 150 dilemmatic clinical scenarios, and incorporated experts opinions, scientific evidence, and clinical debate among colleagues. The course was supported by the Commission for Continuing Education in Health Professions of the National Health System.

The second advanced simulation course of Practicum Script of Cardiology for members of the FAC shared the same characteristics as the one described above, comprising 30 new clinical cases with 150 simulated decision-making scenarios in contexts of uncertainty; all cases were real and corresponded to prevalent pathologies in both the hospital setting and ambulatory care. The planned duration was set at 8 months with an input of 25 minutes per week. The deadline to submit the application ended on September 29, so the activity could start at the beginning of October. As with the courses offered to the SEC, the user is required to answer at least 80% of the clinical cases and obtain an average final score greater than 60% to be approved in the course. The course was accredited by the Federation and granted 300 credits or points for recertification of specialists.

In Ecuador, also for the second consecutive year, Practicum Script is finalizing the launching of the second training course in Pediatrics and Internal Medicine. Ecuadorian specialists and residents are expected to soon benefit from more than 1,000 scholarships. Similarly, Practicum Script will land shortly in Mexico and Brazil, with agreements in the areas of Cardiology and Gastroenterology. All courses offer a possibility to obtain the proper title by the Distance University of Madrid (UDIMA) of University Expert in Clinical Reasoning of the corresponding specialty, which grants 20 European credits. At a national level, the simulation program will be made available to university students through agreements with leading medical schools. At a European level, the foundation will evaluate the educational impact of Practicum Script in a pilot project coordinated along with the European Board of Medical Assessors (EBMA).

"We have expanded our area of dissemination and resumed international alliances because the satisfaction rate is high, which means that users find the simulator to be a helpful ally in continuous medical training," said Dr. Eduardo Hornos, the president of the Practicum Foundation and Institute of Applied Research in Education in Health Sciences. The main benefits of the platform, designed to implement thinking skills, include the sharpening of critical judgment, broadening of differential diagnoses, mental acceleration in recognition of patterns, and strengthening of clinical criteria in cases without categorical evidence.