PRACTICUM LIBRARY. WHO points out the same. 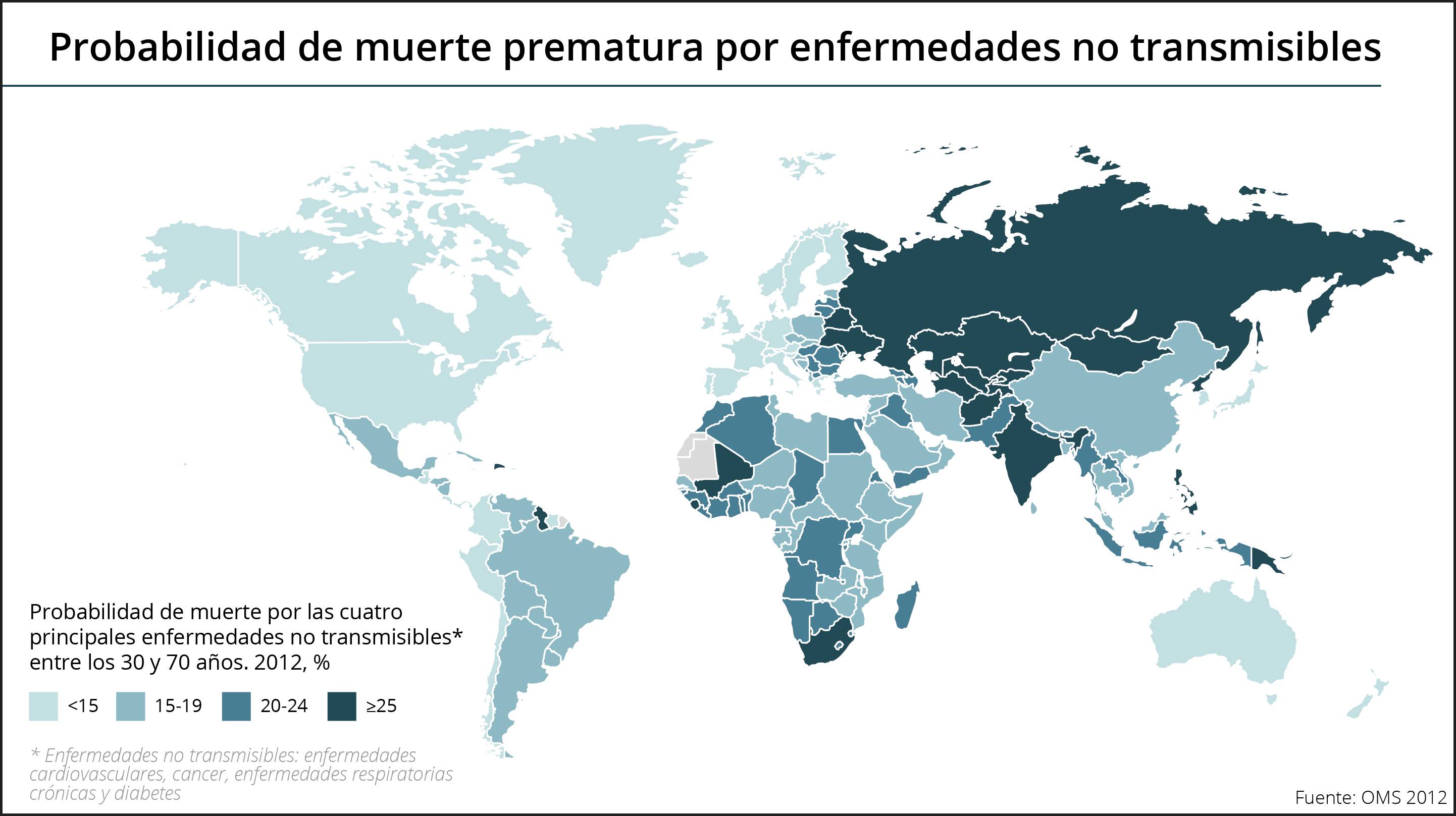 Probability of premature death due to noncommunicable diseases (CVDs, respiratory diseases, diabetes and cancer). WHO - 2012.

EDITOR'S NOTE (January 23, 2019): Given the concerning epidemic of increased consumption of processed foods, salt, sugar, rates of smoking, sedentary lifestyle, sleep disorders, environmental pollution, and stress, could we infer that most noncommunicable diseases are, in fact, behavioral diseases? Diabetes, hypertension, obesity, cardiovascular disorders, and fatty liver disease respond in large part to the same condition for which the environment and life habits are decisive: metabolic syndrome. The increased death rate due to noncommunicable diseases is a clear sign that by decreasing transmissible ones, usually associated with a pathogen and with a deterministic and predictive etiology, we find a phenomenon of increased morbidity and mortality, whose approach deviates from the statistical patient and requires a greater reflection ability and critical judgment.

Global development goals have been increasingly based on country-specific estimates to compare a nation’s progress. To meet this need, the Global Burden of Diseases, Injuries, and Risk Factors 2016 Study (GBD 2016) has estimated the global, regional, and national mortality by specific cause since 1980. This study presented an update of that report, in which newly available data and improved methods were included. The Global Burden of Disease Study 2017 (GBD 2017) provides a comprehensive, cause-specific mortality assessment of 282 causes of death in 195 countries and territories from 1980 to 2017.

The database of causes of death is composed of vital records (VR), verbal autopsies (VA), records, surveys, and policy data. The expansions of the GBD cause-of-death hierarchy resulted in 18 additional causes estimated in the GBD 2017. The recently available data led to estimates for five additional countries: Ethiopia, Iran, New Zealand, Norway, and Russia.

Deaths assigned to the International Classification of Disease (ICD) codes for nonspecific, unlikely, or intermediate causes of death were reassigned to underlying causes by means of redistribution algorithms that were incorporated into the estimation of uncertainty. Statistical modeling tools developed for GBD were used, including the Cause of Death Ensemble model (CODEm), to generate specific cause fractions and mortality rates for each location, year, age, and sex.

Instead of using the UN estimates, as in previous versions, the GBD 2017 independently estimated the population size and fertility rate at all locations. The years of life lost (YLL) were calculated as the sum of each death multiplied by the standard life expectancy at each age.

Worldwide, the number of deaths was greater in men than women at most ages in 2017, except for those older than 85 years. Trends in YLL reflect a global epidemiological transition, with decreases in total YLL related to enteric infections, respiratory infections, and tuberculosis, and maternal and neonatal disorders between 1990 and 2017; these were generally of greater magnitude in the lower levels of the sociodemographic index (SDI).

At the same time, there were large increases in YLL due to neoplasms and cardiovascular diseases. YLL rates decreased in the five main causes of Level 2 in all the SDI quintiles. The main causes of YLL in 1990 (neonatal disorders, lower tract respiratory infections, and diarrheal diseases) were classified in second, fourth, and fifth place, respectively, in 2017. Meanwhile, the estimated YLL increased for ischemic heart disease (ranked first in 2017) and stroke (ranked third), although YLL rates decreased.

Population growth contributed to an increase in total deaths in the top 20 causes of Level 2 mortality between 2007 and 2017. The decrease in the mortality rate due to specific causes reduced the effect of population growth for all causes except three: disorders due to substance use, neurological disorders, and skin and subcutaneous diseases.